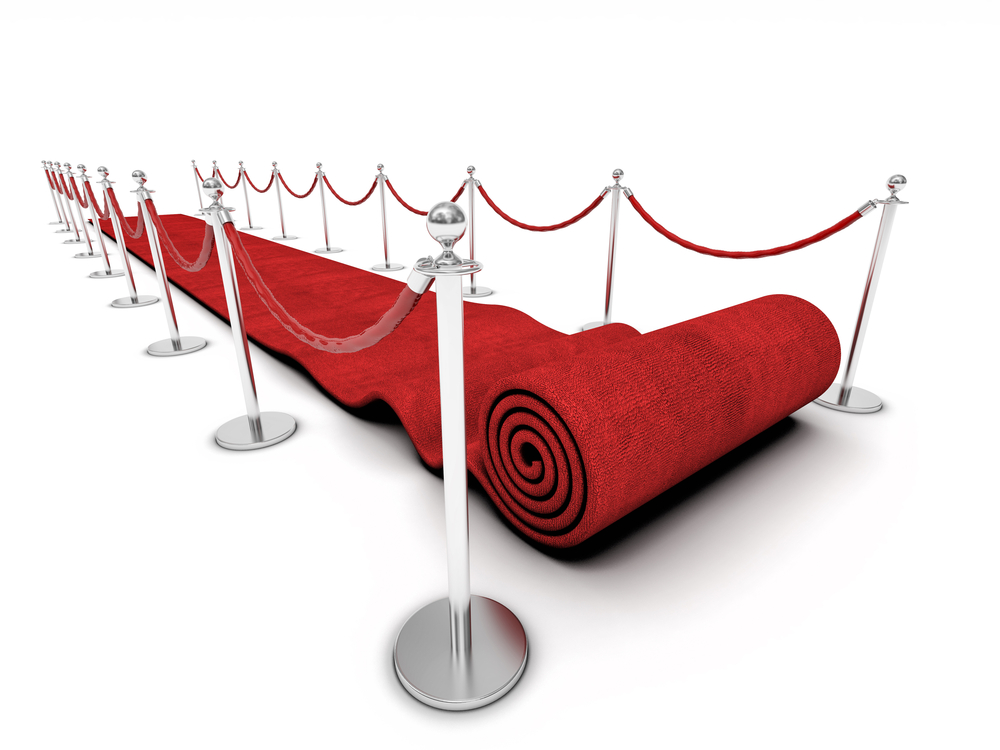 The Amazing Supply Chain of the Red Carpet

Some of you might have already watched the seventh episode of the iconic film series Star Wars (don’t worry, this article is spoiler free!). At the world premiere of “The Force Awakens” on December 14, 2015, the BB 8 droid rolled and Stormtroopers marched down the Red Carpet while journalists scrambled around them to get the perfect shot. Several Hollywood stars joined in on the festivities to celebrate another science fiction masterpiece.

Where VIPs and journalists meet, there is always a red carpet nearby. Being on thousands of pictures and selfies with today’s biggest stars, this product is truly famous. The Red Carpet is, however, no new-comer to the VIP scene. It has been rolled out for kings and presidents for centuries. The earliest reference to a red carpet goes back to the literature from the play, Agamemnon, in 458 BC and was used as a symbol for the gods.

Considering everyday life, carpet manufacturing must be a big industry as floors in most buildings are completely covered with the soft, cozy flooring. In this article, I am rolling out the Red Carpet for the amazing supply chain of this everyday product.

According to The Carpet and Rug Institute located in Dalton, Georgia, today’s American commercial carpet industry has its roots in Philadelphia, dating back to 1791. Weaving carpets used to require immense manual labor until Erastus Bigelow invented the power loom in 1838, revolutionizing the entire carpet industry. The English manufacturer, Axminster Carpets, started its production of carpet even earlier than the Americans. With a history of over 250 years, the company established itself in the industry at an early stage. Today, the family run company still keeps almost the complete supply chain of its products to itself: they purchase wool from suppliers, like one of the world´s leading H. Dawson, and even keep the purchase local by selecting only British sheep wool. The following production steps from spinning the yarn to weaving and designing the end product are conducted at Axminster. To me, this is truly amazing in times of outsourcing and complex global supply chains.

Weaving was originally used to make a carpet or rug. But sometime around the end of the 19th century, the so called “tufting method” was developed which opened new possibilities to automate the production process and increase efficiency by simultaneously implementing several lines of yarn in different colors.

The main fiber of carpets used to be cotton until the mid-1990’s. Later polyester, nylon, rayon, acrylics and wool were also used in the tufting process. Even though the input typically consists of only one main raw material, the end-product comes out in millions of different variations: light, dark, plain, patterned, small area rugs or lengthy red carpets covering today’s runways.

As can be seen in the video below, the first thing needed in the production process of carpets is yarn. Making yarn requires a raw material, which today often is synthetic fiber. The fiber first has to be untangled and smoothed by machines to create thin lines. These lines then go on spools and two, three or more lines are twisted together to become strong and defined yarn. To ensure the yarn doesn´t dissolve during further treatment, it is exposed to high temperatures, up to 270 degrees Fahrenheit (132 degree Celsius).

Once the yarn has been made, the production of the carpet can begin. The yarn is guided through plastic tubes. Hundreds of lines of yarn run through a tufting machine and they are stitched by needles into a thin canvas. During this step, the unique rotation of the machine already creates a special design.

For the famous Red Carpet, the yarn might already have been colored into deep red in previous steps. If the carpet design is patterned, like floral or checked in tartan, the yarn often is dyed after tufting. The plain surface is colored in the desired design by a painting machine. In this case, printing the pattern in only one step seems to be more efficient than elaborately weaving different colored yarn together to create a meaningful picture.

Since the carpet is still very thin, it is glued or pressed onto a stable backing in the last production phase. Under high pressure and heat, the canvas and backing fuse and become a solid carpet, still flexible enough to be rolled for better transport.

In the consumer sector, carpets are just one of several options in the huge textile and lifestyle industry, and therefore mainly sold in small amounts but in a great variety by retail and in Do-It-Yourself (DIY) markets. In the business sector by contrast, suppliers like American Turf and Carpet lay out huge carpets in school libraries, at weddings, exhibitions or synthetic grass for sport-themed events. In 2013 American Turf and Carpet rolled out 54,000 square feet of the Red Carpet for the Hollywood Christmas Parade in Los Angeles.

Even though the flooring industry offers a great variety of alternatives like laminate, stone, or vinyl flooring, forecasts say that general carpet and rug demand in the United States will rise up to 16.2 billion dollars in 2019. The quantity of red colored carpet represents only a small piece of the whole carpet demand. Nevertheless, its timely production and delivery is very important, because no later than for the 88th Academy Awards on February the 28th 2016, the Red Carpet will be rolled out again for the OSCAR nominated celebrities. And while their dresses and suits are always determined by the latest fashion trends, I´m sure, the Red Carpet will never shift to yellow but stay timeless in shape and symbolization.

We have seen that not much input in the form of raw materials is necessary to produce a red carpet. Production processes nevertheless become more and more intricate related to automation, digitalization and global sourcing. Considering the entire supply chain of the Red Carpet, the amazing thing about it is the enormous increase of value as it moves along the chain: from mainly one primal natural raw material to a social, valuable, historic and versatile product that ensures a smooth walk for our admired stars and science fiction characters.

What are some other products with amazing supply chain processes?