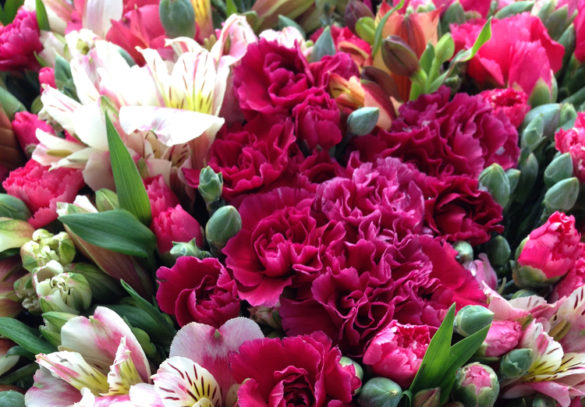 Flowers are both an unusual and quaint thing: beautiful in scent and appearance but also fragile and ultimately quickly perishable. Yet they possess a timeless appeal. Going back as far as the Romans, roses were being imported from Egypt via ship. Not much has changed it would appear, as to this day, flowers are imported from far reaching parts of the world to meet the demand for one special occasion or another, often when needed outside of the season. With mother’s day a distant memory, let us delve into the supply chain of that bouquet you [should have] sent her.

In the United States, approximately $2.3 billion is spent alone on Mother’s Day flowers. The flowers bought make up roughly 25% of floral purchases made for holiday periods. Of those flowers sold, 80% of them are imported from South America, and from countries with more or less permanently warm and sunny climates year round, such as Colombia, Ecuador, and Costa Rica. Timing is crucial throughout the whole operation, with the harvesting to purchase time period taking around 10—12 days. From the time they have been picked to their arrival at retailers, keeping the flowers refrigerated is paramount to prevent them from blossoming prematurely and thus being spoiled before they can be purchased.

By day 2 of their journey, the cut flowers will have arrived at Miami International Airport, which sifts through around 187,000 tons of flowers per annum, to intercept any pests that may have tagged along for the ride. Having cleared customs, normally within 24 hours, they then travel to a warehouse, where they are arranged into bouquets, and then make their way from distributors to vendors to be sold to the general public.

Online retailers and supermarkets dominate much of the cut flowers market, by around a 75% margin. While the above supply chain blue print has proved resilient and relatively effective, as is usually the case, there is room for innovation and improvement. Imported flowers face criticism for both their quality and lack of longevity once they have bloomed, essentially as a result of the relatively long journey they take once picked. Undoubtedly impressive, that a cut flower can be preserved in essentially a moving fridge as it makes its journey from South America to the US, it becomes less so if that expensive bouquet you bought begins to dramatically wilt within a day of delivery. Furthermore, some companies have been accused of marketing gimmicks and false advertising: offering a “fixed” price which is then hiked up with unwanted add-ons and an inflated delivery cost.

One company, however, that has found a niche and differentiated itself from the pack is the Bouqs Co. Although unsuccessful on its recent foray on Shark Tank to attract the investment of the “Sharks”, the firm has received acclaim and endorsements from Forbes to the Wall Street Journal.

The florist boasts two impressive bouquet collections, with flat rates that include shipping and handling charges. The Volcano Collection, imports from a country with a stable warm climate—in this case off the side of a Volcano on the Equator—but with marked improvements in price, quality and longevity. Although in principle similar to the cut flowers supply chain blue print, the company differentiates its bouquets through being picked and assembled on the day of purchase. They are then shipped more or less directly to the recipient, and avoiding any unnecessary time spent in cold storage, all within a six day time frame. For those last minute I-almost-forgot-my-wedding-anniversary purchases, there is the equally as elegant California collection, for next day delivery. Although currently only delivering to all fifty American states, the company plans to expand into Canada and perhaps go global at a later stage.

John contributed regularly to the Inventory and Supply Chain Optimization Blog from 8/2013 to 8/2014, covering the latest breaking news and trends in the supply chain industry. E-Mail: scblog@inform-software.com