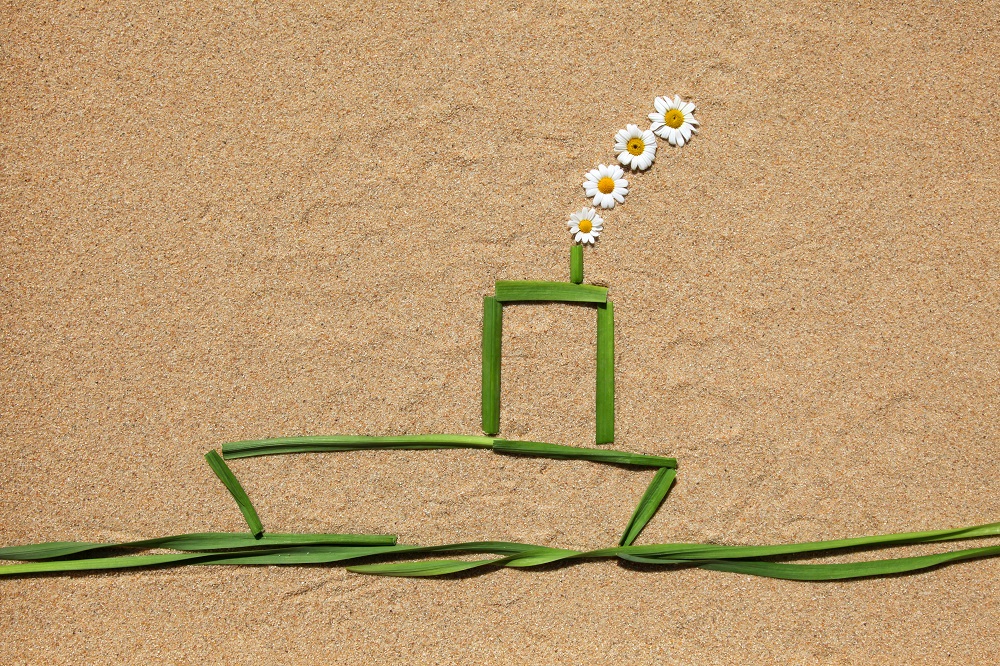 In our evermore interconnected world and rapidly changing operating environments, one logistical workhorse has remained a constant: sea freight. Despite drones buzzing in the sky, Hyperloop tracks being built, and air freight prices constantly fluctuating, our world’s seas remain the most cost effective means of bulk intercontinental transport. The fact is, approximately 90% of world trade is transported by the international shipping industry. This is not expected to change any time soon. Traffic on the high seas is compounded by the movement of people to beautiful destinations on passenger vessels: 26 million people were transported on 314 cruise ships in 2018, a 3.3% increase compared to 2017.

A growing luxury travel industry (moving people) and the world’s most used mode of transportation for international trade (moving raw materials and finished goods) have certainly had an impact on our oceans and surrounding environment over the years. Currently, the shipping industry accounts for 2% of the world’s carbon dioxide emissions. This may not sound like a lot, but if the shipping industry were considered a country, it would be the sixth largest contributor, and if it continues to go  unchecked, it could represent up to 20% of the world’s carbon dioxide output by 2050.

Many companies and international organizations have recognized this issue and are now striving for more sustainable operations. For example, the International Maritime Organization (IMO), with its 174 Member States, has committed to reducing C02 emissions by 50% by 2050, while at the same time committing to efforts to phase them out completely. In order to reach this lofty goal, all stakeholders, including shipyards, ports, ship designers and operators, as well as other companies and organizations involved in the supply chain will have to be on board. Here are three areas that are set to significantly contribute to more sustainable operations at sea in the coming years:

One sure way to clean up operations and reduce fuel consumption is to completely eliminate the need for fossil fuels in propulsion systems. Shipping giant Maersk made an impressive commitment last year with regard to de-carbonization: the company announced its plans to become carbon neutral by 2050. Over the next 5 years, the Danish shipping giant will take a very close look at viable propulsion alternatives. Solar and wind energy may not be practical for container ships as these technologies will take away valuable space for customers’ containers. For this reason, Maersk is closely examining hydrogen solutions.

In fact, at the end of 2018, news surfaced that MAN, a leading designer and manufacturer of low and medium speed engines, became the first supplier to create a liquid hydrogen fuel-gas system for the marine industry. As a fuel, hydrogen does not release any CO2.  The system developed by MAN is designed to be scalable and can be used in both passenger and cargo applications.

Another maritime giant, Carnival Corp, is also set to contribute to de-carbonization. The company plans to launch a cruise ship in 2019, The Costa Smeralda, that can be powered at sea and in port by liquefied natural gas (LNG).

With these three major maritime influencers in on the alternative propulsion game, it is clear the industry is taking its de-carbonization goals seriously.

While clean propulsion alternatives may have the biggest impact on reducing harmful emissions, it will take time for these technologies to be developed, tested and implemented on a wide scale. Therefore, it is clear something must be done in the meantime. One major step has already been taken, aimed at reducing carbon emissions. In the first half of 2018, the International Convention for the Prevention of Pollution from Ships (MARPOL), announced amendments that will have an impact on all member states. One of those amendments is focused on increasing fuel efficiency. The new amendment requires operators of ships with at least 5,000 gross tonnage to collect and report data about fuel consumption to the IMO. It will therefore be important for operators to function more efficiently.

Increased fuel efficiency can be achieved in a variety of ways. Weight management is a major factor. Heavier ships logically require higher fuel usage. One place to look for weight reduction is bunker fuel. Ships should always ensure the most economical amount of bunker is on hand for its voyages. Another, often overlooked, weight saving option is ship windows. Traditionally, ship glass windows are thick and heavy. This was vital to being able to withstand extreme pressure produced by large waves at sea. Using high-strength laminated glass specifically designed for ship applications can reduce glass thickness and in turn, the overall glass weight contribution to a ship.

Furthermore, choosing the right glass for a ship can also reduce energy usage from its heating, ventilation and air conditioning (HVAC) systems. With the right thermal control coating applied to the glass, ship temperatures can be better managed and HVAC usage can be reduced, which in turn improves overall fuel efficiency.

It is clear that ship operators and designers need to continue to find innovative ways to become more efficient if the targets for 2050 are to be reached.

Garbage from ships can pose just as much a danger to the environment as fuel emissions and other chemicals. While it is clear that the majority of garbage that washes ashore is from land-based activity, ships also contribute to the mess. For this reason, MARPOL Annex V was created which is aimed at reducing and ultimately eliminating garbage left at sea by all kinds of ships. To date, 150 countries have signed up to the Annex, despite the fact that it is optional. Annex V forbids the discharge of garbage into the sea, with the strongest focus on plastics, synthetic ropes, cooking oil, packing materials and paper. Recent amendments to the Annex also require ship operators to implement a Garbage Management Plan and maintain a Garbage Record Book.

The successful execution of MARPOL Annex V is once again dependent on collaboration within the industry. Ports, for example, must provide adequate garbage reception facilities without causing delays for the ships.

It will be interesting to see how the maritime industry makes progress toward its ambitious sustainability goals in the coming years. One thing is certain: collaboration is key! Ship designers need to integrate energy efficient solutions into their plans, operators should focus on efficiently managing their fuel consumption, ports must offer sufficient garbage reception facilities and marine industry thought leaders must continue to take the lead in alternative propulsion research and development. With these factors in place, and of course many more, the shipping industry will reach its 2050 goals.

Where do you see the most potential for improving sustainable logistics operations at sea?