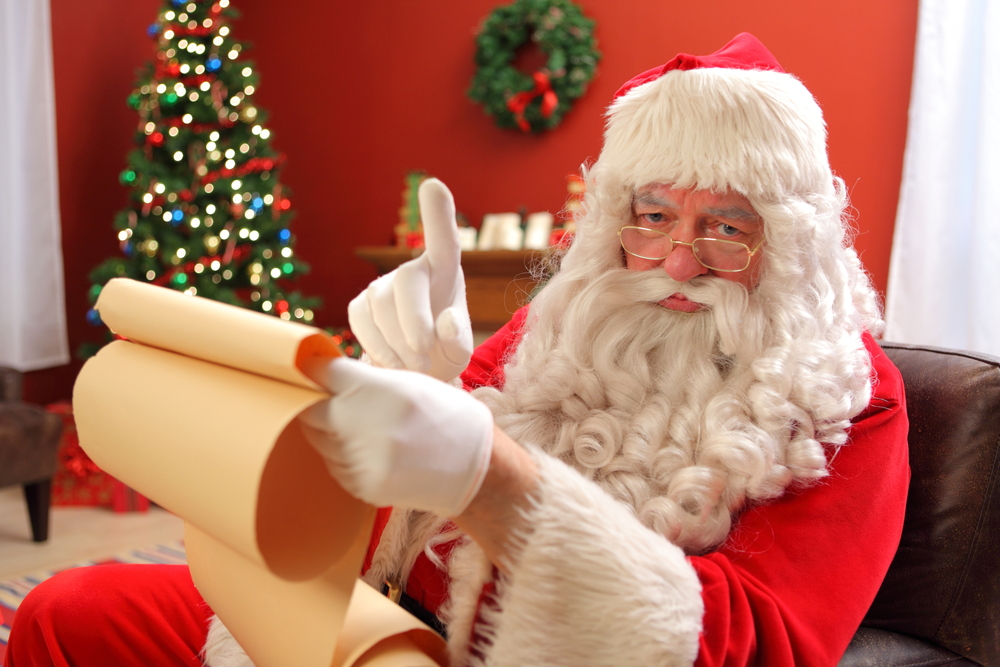 It’s that time of year again. The deciding moment is upon us: will Santa Claus stuff our stockings with wonderful goodies or a lump of coal? For those not familiar with the tradition, it is said that Santa brings gifts to children who were well–behaved throughout the year during the night of December 24. Those children that caused a lot of trouble over the course of the previous year can expect a lump of coal on Christmas morning. Santa uses a dynamic naughty and nice list to monitor the progress that the children make throughout the year. If you are wondering how you currently stand, you can visit the North Pole Times and find out (I made the nice list!): If we were to apply Santa’s dynamic naughty and nice list to the supply chain industry, based on activities over the course of 2015, I believe it would look something like this:

This may be a hotly debated choice as not all of the headlines covering Amazon over the past year were positive. One example is the ongoing labor dispute in Germany regarding unfair working conditions and wages. However, from Santa’s perspective, the company has earned a top spot on this year’s nice list. First and foremost, Amazon has lightened Santa’s holiday shipping load – especially after its Prime Now roll out to several cities in the United States over the course of the year. But in all seriousness, Amazon is a key player within supply chain and logistics, and can be credited with keeping the innovative spirit alive within the industry. Its drone delivery plans for consumer goods and full commitment to making e-commerce as convenient as possible are keeping many other logistics companies on their toes. In essence, a lot can be learned from the company, from both positive and negative aspects of their operating procedures.

I came across several very impressive humanitarian logistics examples over the course of 2015 and believe there is a lot to be learned from these practitioners. One example is the German Federal Agency for Technical Relief (THW). In for-profit operations, the practice of firefighting (the short-notice handling of crises) is unfortunately quite common. The THW is a great place to turn for tips, as this is their core competence. When disaster strikes, time is of the essence, and the German THW has created an excellent modular-based logistics system which enables a timely response to disaster, both domestically and internationally. Most recently, the THW received a special humanitarian logistics prize from the German National Logistics Association for their work during the current refugee crisis in Germany. Some of their tasks include the building of tents, assembly of beds and distribution of food. The THW has demonstrated excellence in procurement, “manufacturing” (assembly line for beds) and distribution during this crisis.

Lora Cecere is the founder of Supply Chain Insights, a company dedicated to supply chain research and providing supply chain professionals with actionable advice. In the company’s October newsletter, it was announced that they released their 60th supply chain report. The research results are open access, and enrich the supply chain community as a whole. Lora and her team at Supply Chain Insights have helped numerous companies and supply chain experts begin focusing on the metrics that truly matter for success. A major focus of the research is placed on defining supply chain excellence, and for this purpose, a report is published that identifies several industry-specific “Supply Chains to Admire”. Most recently, Lora and her team created a social platform, Beet Fusion, to encourage the exchange of best practice information and collaboration within the supply chain industry. In essence, Lora Cecere has made Santa’s nice list due to her efforts in bringing the supply chain industry to the forefront and encouraging advancement in process design.

Back in November, Nestle stepped forward and put itself on the naughty list, making Santa’s job a lot easier. The company admitted to the existence of forced labor in its seafood supply chain. Furthermore, Nestle essentially argued that any company buying seafood from Thailand belongs on that same naughty list. In addition, not more than a week later, Nestle was accused of unlawfully sourcing water for its Arrowhead brand from the San Bernardino National Forest in California, a claim the company strongly disputes.

As mentioned in the introduction, Santa’s list is dynamic, meaning a shift from one side to the other is certainly possible. Some may argue that Nestle already belongs on the nice list this year due to its swift reaction to the revelation of forced labor in its supply chain processes. The company has, for example, laid out a detailed plan to combat forced labor within the Thai fishing market and is currently being viewed as a first-mover against this practice.

Mainstream fashion is an industry that was criticized quite often in 2015 for its opaque supply chain practices. Terrible labor conditions, animal cruelty, missing environmental awareness and wastefulness are all aspects associated with fast fashion supply chain processes, not just in 2015, but for the past several years. The garment trade business has become more global, and as a result, supply chain processes have become more complex. In 2013, it became evident that many companies needed to take corrective action in their sourcing departments as the Rana Plaza building in Bangladesh came crashing down. While this sparked many changes within the industry, there is still a lot of progress that needs to be made in terms of corporate social responsibility and supply chain transparency.

No, Kai Keppner is not a company, but rather one of our top contributors here at the Inventory and Supply Chain Optimization blog. Last year, Kai wrote an article that surely landed him directly at the top of the naughty list, titled: “Santa’s supply chain – Bah Humbug!” I will go out on a limb and say Santa was not amused with Kai’s critical analysis of his magical supply chain processes. Kai went so far as to say that, “Santa would be vaporized in a huge fireball within the fraction of a second” if his supply chain efforts were to be believed. You can read Kai’s full analysis here.

What examples would you add to Santa’s naughty and nice supply chain list?