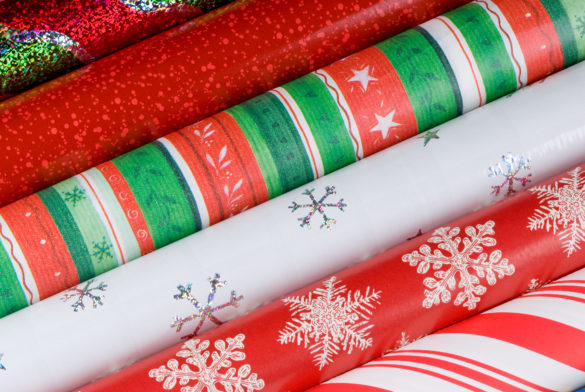 Ripping open wrapping paper on Christmas morning is without a doubt one of the most exciting things children and adults alike look forward to. It adds sparkle to your gifts and spreads the Christmas cheer. But once the presents have been exchanged and opened, the magic fades and what’s left is a pile of waste. What happens to all that?

The use of wrapping paper was first documented in ancient China, where paper was invented in 2nd century BC. Monetary gifts were wrapped with paper which formed an envelope known as a chih pao. The wrapped gifts were distributed by the Chinese court to government officials.

Many centuries later, the founders of Hallmark Cards, Hall brothers Rollie and Joyce Hall, did obviously not invent gift wrapping, but their innovations have led to the development of what we know as wrapping paper today. In the early days of the 20th century, gifts were normally wrapped in brown paper, newspapers or even fabric. In 1917, the Hall brothers sold tissue paper for gift wrap during the holidays in a shop in downtown Kansas City, Mo until they ran out. They turned to envelope liners until they sold out of that too. A few years later, they came up with the idea of printing their own decorate gift wrap. They are credited with founding the modern-day gift wrap industry in 1917.

Increased use of wrapping paper during the Christmas period

The low recycling quota seems almost like something which has fallen out of time. If all of the wrapping paper waste was recycled, it could require 70% less energy than making it from raw materials. Just one ton of recycled paper would save 17 trees, 18.7 square foot of landfill space, and 4,000 kilowatts of electricity. So, what is it that keeps us from recycling more wrapping paper?

Wrapping paper is not just paper

Shiny and glitter-encrusted paper is especially bad. It cannot be recycled and is nothing else but microplastics. The glitter pollutes oceans and ends up being ingested by animals which, over time, will collect in their stomachs and can be fatal. Fibres found in cheaper types of wrapping paper are not strong enough to recycle; wrapping paper is often dyed and laminated, and may also contain non-paper additives such as gold and silver coloring, glitter and plastics. Then there is the added issue of sticky tape, which is still often attached to paper when thrown away. Landfill or even incineration are often the only options to get rid of the waste.

But perhaps this is a generational issue. Remember when your granny used to save the wrapping paper and bows? With more disposable income and more products becoming easily disposable, we have become a throwaway society. However, many are trying to cut down on wrapping paper waste over the festive period.

‘Green gifting‘ is an alternative to using traditional wrapping paper. It is an emerging trend which aims to lower its negative environmental impact, as well as saving money for personal budgets from the gift giving process. Some people attempt to avoid contributing to the amount of waste being generated by either unwrapping gifts with care so as to re-use the paper, using old newspapers (as in the old days); or by using decorated cloth gift sacks which can be easily used many times. Both of these are part of the green gifting trend that encourages recycling.

Gift wrapping and greetings cards manufacturers, Hallmark, have claimed they use 100% recycled content for the cores of wrapping paper. However, despite experimenting with using recycled materials in their products, it has not been very popular with consumers.

It is difficult to say if green gifting will catch on with the vast majority, considering today’s throwaway society, but with growing environmental concerns that will affect us all, perhaps this may be the better option if you don’t want to find a lump of coal in your stocking this Christmas.

Hi my friend! I want to say that this article is amazing, great written and include approximately all vital infos. I would like to see extra posts like this .

I’m impressed, I have to say. Really not often do I encounter a weblog that’s both educative and entertaining, and let me tell you, you will have hit the nail on the head. Your thought is excellent; the problem is something that not enough people are speaking intelligently about. I’m very pleased that I stumbled across this in my search for something regarding this.

All of these additives to normal wrapping paper mean it’s no longer recyclable. Ribbon is made from fabrics which, while reusable, are not recyclable in your curbside bin. It seems silly since ‘paper’ is in the name, but most of today’s wrapping paper has very little paper in it at all. It’s a composite made of different materials including plastics. The flashier it looks, the more likely it is to be made up of nonrecyclable materials. Those shiny dinosaurs riding Rudolf are hilarious and fun, but they create a waste problem.

I think the admin of this web page is really working hard for his website, since here every material is quality based information.

I’d like to thank you for the efforts you’ve put in penning this website.
I am hoping to see the same high-grade blog posts by you in the future as well.

In truth, your creative writing abilities has inspired me to get my own blog
now 😉

You have made some really good points there. I checked on the net for additional information about the issue and found most people will go along with your views on this website.