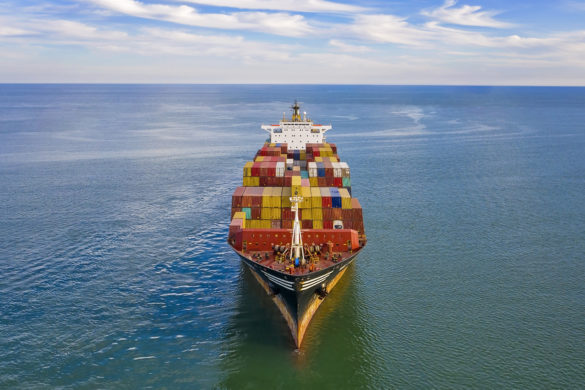 The Biggest Container Ships in 2021

Since the recent blockade in the Suez Canal, it has put large container ships into the spotlight. While the stuck cargo ship “Ever Given” is one of the biggest ships in the world, there are some other marine behemoths which even surpass this giant’s capacity. What the Top 10 of these ships have in common is a length of around 400 meters which is almost as tall as the Empire State Building if turned upright.

Here are the world’s 10 biggest container ships in 2021 based on Twenty-foot Equivalent Unit (TEU) capacity:

The sister ship of the (in)famous giant cargo ship Ever Given has a high deadweight tonnage (DWT) of 218,000 metric tons (MT), its length is 400 meters and has a breadth of 58.8 meters, making it longer than four soccer fields combined. It has a capacity of 20,124 to 20,160 TEU and it is the first 20,000 TEU container ship – among its sister ships Ever Goods, Genius, Given and Gifted – to be delivered to Taiwan’s cargo shipping giant EVERGREEN which currently operates it.

See where Ever Golden is right now.

Named after French author and aviator Antoine De Saint Exupery, this ship has a capacity of 20,954 TEU, making it the largest container ship to sail under the French flag. It is 400 meters long and 59 meters wide. It is an environmentally-friendly vessel, which has a new generation engine and a Becker-twisted fin to reduce oil consumption –(25%) and carbon dioxide emissions (-4). It also has a system of filters and UV lamps for the treatment of ballast water which ensures greater protection of marine biodiversity.

This container ship, with a carrying capacity of 21,237 TEU, is the largest cargo ship in China. It has a length of 400 meters and a width of 58.6 meters. For optimum performance and enhanced fuel efficiency, the ship is equipped with ABB Turbochargers which help to achieve a maximum speed of 22 nautical miles per hour.

The OOCL Hong Kong has a carrying capacity of 21,413 TEU. It has a length of 399.87 meters, a breadth of 58.8 meters and a depth of 32.5 meters. OOCL Hong Kong serves the trade lane from East Asia to Northern Europe under the flag of Hong Kong. The vessel is the first of six identical ships ordered by OOCL for a total cost of $950 million.

HMM Oslo, along with its sister ships HMM Algeciras and HMM Copenhagen, made their maiden voyage in 2020. It is 400 meters long and 61.50 meters wide with a maximum draft of 16.50 meters. HMM Oslo also has a carrying capacity of 23,000 TEU.

Jacques Saadé of CMA CGM is one of the largest containerships powered by liquefied natural gas (LNG). The vessel has a capacity of 23,112 TEU and measures 400 meters long, 61 meters at its widest point, and a height of 78 meters.

MSC Mina has a container carrying capacity of 23,656 TEU and is approximately 400 meters in length and 61 meters in width. The ship can transport the equivalent of around 384 million pairs of shoes or 47,312 cars. The vessel is apparently also equipped with more than 2,000 refrigerated containers, which boosts the trade of food, drink, pharmaceutical and other chilled and frozen items between Asia and Europe. This is probably true for its sister ship as well, MSC Gülsün.

MSC Gulsun at the time of her launch in 2019 was the world’s largest container ship. The vessel, built by Samsung Heavy Industries in South Korea, has a capacity of 23,756 TEU. It is the first vessel of its kind that is capable of transporting 24 containers side by side across the breadth of its hull. The ship is 400 meters long and 62 meters wide.

HMM Algeciras is the world’s biggest container ship, with 23,964 TEU capacity, and is considered one of the most technologically advanced container ships in the world. The Panama flagged vessel is 399.9 meters long with 33.2 meters depth. It’s capacity is only 208 TEU more than MSC Gülsün.

HMM plans to enhance its environmental capabilities by operating vessels that are equipped with a scrubber system in preparation for IMO 2020 environmental regulations. An optimized hull design and a highly efficient engine are also expected to improve its energy efficiency and reduce carbon emissions.