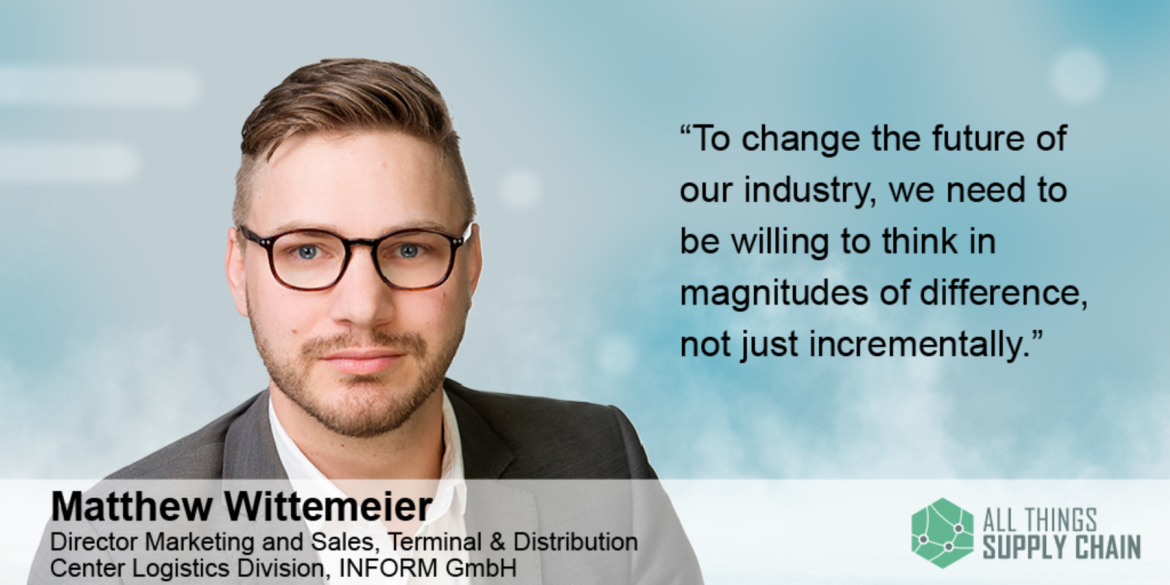 Ocean freight is a key element of cross-border trade allowing huge volumes of goods to be transported across the world. This vital part of the supply chain has been damaged by recent disruptions which left the world’s biggest shipping ports backlogged with containers. In this interview, we will delve into the world of ocean freight and how it can be transformed to avoid disruptions in the future.

I had the pleasure of interviewing Matthew Wittemeier, Director Marketing and Sales at INFORM’s Terminal & Distribution Center Logistics Division where he’s become a thought-provoking contributor to many industry publications and conferences. He’s co-author of the multi-award winning 2038: A Smart Port Story – a novella about the future of technology and the social challenges it may bring. In addition, he is a member and judge at The Academy of Interactive and Visual Arts (AIVA), as well as having been the senior producer and host of the buzzITtalk podcast and served on the board of YoungShip Rotterdam.

What is the current approach to ocean freight?

If we drill down into container terminals, where INFORM has specialized add-on optimization modules, we rely on interfacing with the terminal’s Terminal Operating System (TOS). While we have a broad range of proven interfaces to major TOS suppliers, these interfaces must still vary from site to site as each deployment of TOS seems to vary slightly.

I was at a conference a few weeks back, and a major North American terminal operator was speaking about the fact that everyone wants his terminal’s data, but so far, they want it so they can turn around and sell it back to him in the form of a “service.” I’ve argued before that data should not be commoditized within our industry but rather be used to fuel innovation. We need to move past the 2000’s view that “data is the new oil” and see that data fuels innovation, which improves the bottom lines for everyone.

Why are disruptions in ocean freight becoming more frequent?

Sea-bound cargo is the visible representation of globalization, and globalization is easily susceptible to disruption. Manufacturing and port shutdowns in China at the beginning of COVID-19 in 2020 are the prime cause of the logjam of containers in California that is still a major issue today, and we’re seeing this again with the lockdowns across China. FEPORT, an industry body for private European ports, issued an alert in late April highlighting the extremely high number of ships anchored off the coast of China waiting to be served. If history is anything to base future performance on, we’re in for a rough couple of years again.

Furthermore, the frequency of disruptive events has accelerated over the past four years due to geopolitics, COVID-19, climate change, and cybersecurity issues, to list just a few. The shift in politics from pro-globalization to pro-nationalism is fueling disruption at a rate not seen since the 1980s. The Russian invasion of Ukraine and subsequent war is driving supply shortages of key commodities. The sanctions against Russia are impacting supply chains as well. Also, the increasing frequency and intensity of severe weather events are driving disruption. The Suez Canal blockage of 2021 was at least partially attributed to an abnormally severe sandstorm causing visibility issues on the canal.

Finally, cybersecurity issues are the most difficult to factor into the equation as they are often unreported. That said, in the past week alone, an under-reported incident involving a global maritime and intermodal terminal SaaS service provider saw gate systems globally impacted by a hack of their systems. This was a minor incident when compared to the 2017 NotPetya attack that crippled Maersk and APM Terminals for weeks, but if we take an educated guess that incidences like this are happening more frequently than reported, I suspect the combined impact of several smaller attacks on the industry is on par or worse than the 2017 Maersk incidence.

The increase in frequency across each of these categories is also causing a multiple-ripple effect, where one disruption impacts another, further accentuating the impact of any singular event. Think of a tranquil pond; when you toss in a single stone, the ripples are clear and defined – predictable even. When you throw in multiple stones at once, a picture of chaos comes sharply into view.

What would planning in ocean freight need to look like in order to best mitigate disruptions?

We must break down the silos right across the supply chain. Data is currently seen as a commodity; however, this approach leads to stakeholders hoarding data as opposed to sharing it. Once we can agree to share data, the data must be integrated into communal platforms so it can be harmonized and easily shared with dependent stakeholders in real-time. This also requires the industry to agree on what different data points should look like. The industry has a good start on these challenges through initiatives like DCSA and TIC 4.0.

I’m biased in my next statement. I would go a step further and say that, as an industry, we would benefit very strongly from a not-for-profit, centralized planning and optimization organization. I’m thinking of the Hamburg Vessel Control Center, which manages activities at the Port of Hamburg on behalf of all competing terminal operators – but on regional and global scales. The ability to optimize the maritime supply chain as a whole is a very real possibility given today’s technology (both in terms of hardware and algorithmic performance). The limiting factor is our imagination, followed by the industry’s willingness to collaborate. To change the future of our industry, we need to be willing to think in magnitudes of difference, not just incrementally.

Are there any industries that sea freight can/should take as a model?

Aviation is often seen as a good example of how to break down barriers between siloed data and share it among stakeholders. Any airport or airline operates dozens of disparate subsystems that all rely on shared data to keep the industry moving. The industry does a very good job of sharing data that is highly standardized between competing stakeholders to facilitate travel right across the industry.

We are always looking for experts to take part in our Supply Chain – Ask an Expert series. If you want to take part, feel free to contact us at contact@allthingssupplychain.com