Home General How d’ya like your eggs in the morning? – Why 3D printing may soon be on the menu (of companies) 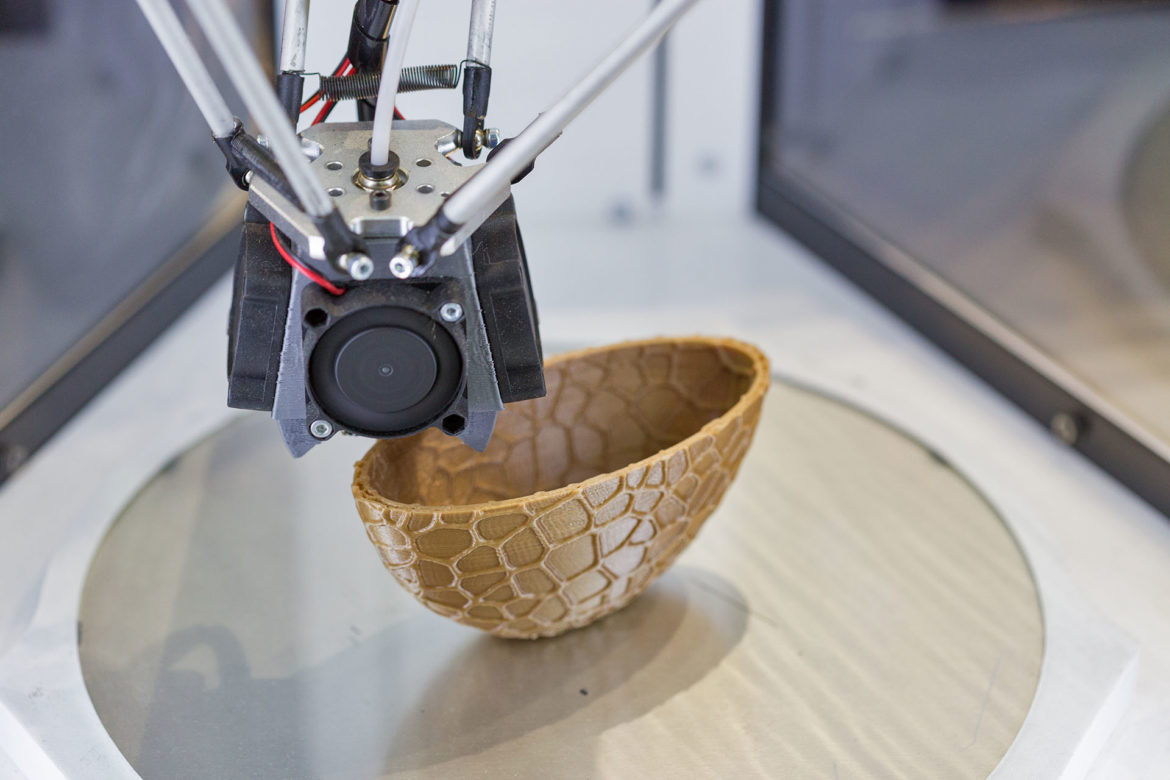 How d’ya like your eggs in the morning? – Why 3D printing may soon be on the menu (of companies)

“How d’ya like your eggs in the morning?” is a classic song from the 1951 film, “Rich, Young and Pretty”. While you may not recognize the film, you will (most likely) recognize the song.

However almost 70 years later, this question could soon no longer be “boiled or fried?” but “boiled, fried or 3D-printed?”

Although this seems like a set up for a joke, it is in fact true. At some point in the future instead of preparing your food in the conventional way, you could print it. While the technology hasn’t quite reached the stage yet, where you can print food at home, 3D printing technology does have the general ability to do this.

For instance, it is possible that from as early as 2020 you could be able to order 3D printed meat in restaurants across Europe. This means next time you order a steak in a restaurant don’t be surprised when the waiter asks you if you want that old style cow or 3D printed. With meat-free alternative products becoming more popular every year, this could actually become a more popular choice than many people believe right now.

If we take a look at the current state of 3D printing, it’s not just the food industry where 3D printing has made a huge impact over the last few years. For example, it is also been used in the construction industry to build houses, the healthcare industry for organ replacement and in the manufacturing industry.

In fact, 3D printing’s biggest impact is probably being felt in the manufacturing industry. It is predicted that by 2020, 80% of finished products will involve some form of 3D printing. This means that most products will have a 3D printed element somewhere in their supply chain.

So, what benefits can 3D printing bring to the supply chain today?

When something breaks, you just order a new one or a new part. Simple!

For consumers, especially those with Amazon Prime, it’s easy: you just go online, order it and it will arrive the next day.

For companies – especially those that don’t manufacture their own parts – it is often ten times more difficult: they order the replacement part, but then could be waiting days, if not weeks or in some cases months. With wait times usually being longer for special customized parts of course. For example, if a haulage company must wait weeks for a replacement part, this results in vehicles that cannot be used – and lost revenues.

This is where 3D printing can play a beneficial role. Most of the time spare parts are required in small quantities which is why manufacturers and wholesalers keep only a few items with the risk of running out stock quickly in certain scenarios. For this reason, waiting times can sometimes be very long when demand suddenly rises. 3D printing offers a solution which allows firms to print parts on demand – meaning that the parts are available as and when the company needs them with no delay.

Some companies, like the German railway company, Deutsche Bahn, are currently using 3D printing for this reason. In their Integrated Interim Report January to June 2019 , the company notes that they are “increasingly relying on 3D printing in maintenance”. With the report stating that in 2018, over 7,000 replacement parts had been printed and that they expect this number to rise to around 11,000 parts by the end of 2019.

As the technology develops, 3D printing is allowing for more innovations to take place. When the printers were first invented, the only material that could be printed with was plastic. Whereas now over 500 different materials can be used in the printing process, from traditional materials such as rubber and concrete to cells, leather – even chocolate.

This has led to many new inventions and innovative solutions, especially within science. For example, researchers at the Rensselaer Polytechnic in New York and Yale School of Medicine have managed to create 3D printed skin. The skin contains blood vessels and has undergone significant testing. Although still in testing, developers hope that the skin will, one day, be able to be used and prevent the body from rejecting grafted tissue.

However, it is not just within medical science where innovative solutions are being created using 3D printers. An example of this is a new bulletproof cube that has been created by researchers at the Rice University Brown School of Engineering. The cubes have been printed from tubulane-like ultrahard polymers and this makes them lightweight and full of holes but as hard as a diamond. The blocks have undergone significant testing and the best results show that the 3D printed block is 10 times more efficient at stopping a bullet than a solid block. As the blocks continue to go under significant testing, it is predicted that they could be developed into bullet proof vests and tank armor.

Sustainability seems to be one of the “buzzwords” at the moment. This is partly due to consumers pushing for businesses to be more sustainable because of their concerns about climate change. So it’s no surprise that sustainability has been noted as one of the reasons why consumers would pick one particular product over another.

When you think about it really, most of today’s manufacturing processes are not that sustainable. Most companies don’t source and build their product in one location. In reality, the sourcing and manufacturing process takes place all across the world resulting in lots of transport and air miles being accrued – as well as a lot of CO2 emissions. For example, production of the Nike supply chain takes place across 41 countries and the materials are sourced from 11 different countries. While companies like Nike do their bit to be as sustainable as possible, the very nature of today’s manufacturing processes set limitations for these approaches.

However, 3D printing can be one solution to this dilemma. The technology offers the opportunity for many products to be printed/made locally or on site at a low cost which reduces or eliminates the carbon emissions associated with extensive transport processes.

What 3D printed food has to do with sustainability?

It’s not just the manufacturing sector that is responsible for releasing emissions, the agricultural sector is also to blame. While there’s the obvious CO2 emissions that are released from the machinery used, the cattle that is farmed also releases methane – with the effects of methane being said to be worse for the environment than CO2.

On average a cow will release between 70 -120kg of methane a year, then times this figure by the 1.3 billion cows and bulls across the world and without doing the math – that’s a lot of methane. This is where 3D printing provides a more sustainable approach. When 3D printers are used to “produce” meat, this removes the need for the cows that would be originally used to fulfil demand and consequently the methane that these cows would produce.

Using 3D printing brings benefits to your supply chain. It’s for this reason that it would come as no surprise that 3D printing will continue to play a role in the supply chain – possibly an even bigger role than it does now – and in the long run make manufacturing a whole lot easier.

In the meantime, while I wait for the day that I will be able to print food in my own home, I’ll have to go to the supermarket to buy what I want to eat and use the oven to cook it. Although I won’t be having eggs – I much prefer pizza.