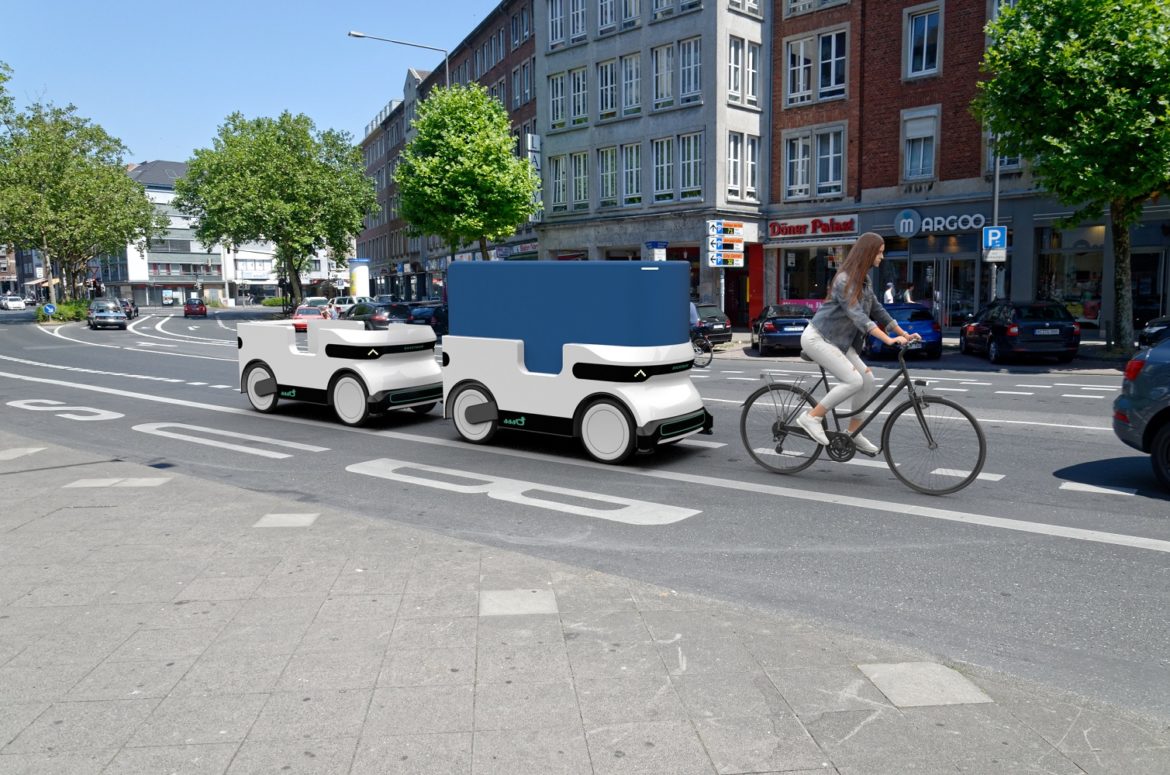 Smaller than a car, bigger than a cargo bike and several of them at once – the new vehicle concept Ducktrain has the potential to change urban delivery and industrial logistics sustainably.

Our inner cities have a problem: they are congested. More and more people own a car and additionally growth rates for global parcel and express volumes have been increasing sharply in recent years. In 2018, the global domestic parcel traffic increased to over 14.8 billion units.

The main reason is that e-commerce is increasingly competing with stationary trade. In 2019, retail e-commerce sales worldwide amounted to 3.53 trillion US dollars and e-retail revenues are projected to grow to 6.54 trillion US dollars in 2022. Globally, online shopping has become a popular activity. Courier and parcel services take over the delivery, their vans bring each small parcel individually to the front door.

Online shops and mail-order companies call it a win-win situation, but unfortunately the reality is different: Customers receive their goods late, not at all, or have to pick them up in various stores and shops. The employees are underpaid and overstrained. Road traffic in the city centers collapses, a permanent state of stress that frustrates both residents and stationary retailers.

Dr. Kai Kreisköther is a traffic expert and Managing Director of the German start-up Ducktrain. He believes that the so-called last mile delivery, i.e. the final distribution, is the problem: “Especially in city centers and densely populated areas, we need new concepts to reduce traffic and also environmental pollution.”

Together with a number of partners, he has found a solution to this problem, which is also the name of his company – Ducktrain. The idea behind it: Up to five small lightweight electric vehicles are coupled into one train. “In this way, we transport the load volume of a conventional van into the cities,” as the engineer explains. Such a “duck train” could considerably ease the traffic situation, because the one-meter-wide vehicles can use normal roads and also bicycle paths.

“When the Ducktrains arrive in the delivery district, they will separate for the last ten to 500 meters and individual Ducks will bring the parcels from door to door,” says Kreisköther. The Ducktrain steers and drives independently, automatically following the delivery person who is either walking or cycling. The Ducks are designed to drive at up to 25 km/h (15.5 mph) but could be even faster. They can hold one EUR-pallet and easily transport 300 kilograms and more. Delivery is much more efficient, as less time is lost due to the constant change between driving and parking, traffic jams, etc. 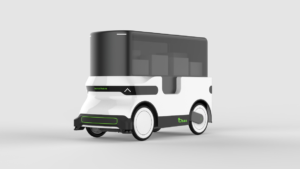 One solution for different deliveries

The innovative concept is not only suitable for postal and parcel deliveries, freight forwarding applications are also possible. A Duck can deliver retail pallets and move them to the goods receiving area, for instance. This eliminates the need to park a truck at the side of the road as well as the dangerous and traffic-obstructing unloading. Dr. Kreisköther and his partners are also thinking of industrial applications for larger company premises or logistics tasks.

“When we were looking for a solution to the massive congestion of the transport infrastructure, it turned out that the available vehicles were not suitable,” reports the engineer. “So, we had to develop our own vehicle.” From the very beginning, the inventors took a long-term view and planned the new mobility concept as an autonomous vehicle. Not yet in the first stage of development, but little by little the Ducktrain should take over more and more functions automatically. The developers want to build the first fully autonomous Ducktrains as early as 2021, pilot tests for the autonomous Ducktrains are planned for 2022 and the series vehicle is scheduled to be on the road from 2025.

But first things first. From Spring 2020, the start-up will be testing the new technology in pilot applications. “We have just completed the first prototype vehicle. This means that test drives with customers and application partners are now on the agenda,” says Kreisköther. “Initially in enclosed areas such as in industrial areas and logistics sites, then in public spaces.”

Ducktrain has not yet been approved by the German authorities since it is a completely new category of vehicle. Furthermore, there are no guidelines for this kind of automation technology so far. “We are currently working with various authorities as well as inspection and product certification services on the approval for our vehicle,” says the Managing Director.

By the way, Ducktrains are not to be sold, rather the customers pay for the use of the vehicle. “We make sure that the Ducktrains are always available and at the latest technological level,” he continues. This financing concept is obviously interesting for many industries. A local newspaper publisher is participating in the trial, as are freight companies and the Competence Center for Sustainable Mobility. Other international logistics companies will join shortly. 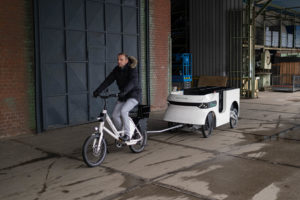 “Imagine,” says Kreisköther. “In the morning the newspaper delivery uses a Ducktrain, then follows the mail and parcel delivery and in the evening the same vehicle brings you the pizza.” Other applications are pharmacies, which are often serviced several times a day, or heavy beverage deliveries. More and more city residents are having their shopping taken home.

Together with customers and partners, the young company would like to develop different vehicle constructions, for example for the transport and delivery of parcels, pallets, food or a mobile parcel station with lockers from which customers can pick up their shipments themselves.

The possible applications are manifold, but the first step is to get the ideas on the road. In any case, Ducktrain already has two important supporters: The German Federal Ministry of Transport (BMVI) and the German Federal Environmental Foundation (Deutsche Bundesstiftung Umwelt – DBU) have decided to support Ducktrain because it is both economically and ecologically sensible. This helps politically, for example in the approval process, but also through financial support.