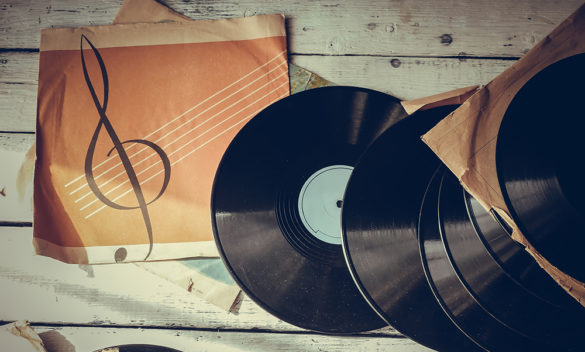 The Amazing Supply Chain of a Vinyl Record

From 80’s gaming controls to Polaroid cameras, retro is all the rage. This ‘old is the new new’ phenomenon could perhaps be seen as a means of fighting the uniformity posed by the digital era. With the constant bombardment of new technologies and trends comes an underlying struggle for authenticity and individuality.

The same goes for the music industry. Though CD and digital sales have seen a steady decrease since the rise of streaming platforms such as Spotify, vinyl record sales have surged. Since 2009, vinyl sales have increased by a massive 260%. The popularity of the format is largely based upon its nostalgic value and rich, authentic sound. I consider myself to be a bit of an audiophile and although I agree that digital files are overall more precise and higher in quality, vinyl records stay more true to the original source track, as many of the sound frequencies are lost in today’s digital recordings.

Seeing this dead industry spring back to life made me wonder, how has the vinyl record supply chain changed? And what challenges are associated with resurrected industries?

Let’s start with how a vinyl record is made:

The origins of the long-playing (LP) record began with Thomas Edison’s invention of the phonograph in 1877. Edison- the lightbulb guy- managed to record and play back sound using a grooved metal cylinder wrapped in tin foil, which was developed into a wax cylinder shortly after. The flat disc version that we know and use today wasn’t invented until the early 20th century. Finally, the first disc made out of PVC (LP record) was released in 1948.

Barring the composition of the format, not much has changed about the method of production over the years. The 11 steps shown in the video have so far stood the test of time, but there is still much room for improvement.

The first and most obvious step is the creation of a master recording. Music must be recorded onto lacquer, which is done by making small indentations, often using a cutting tool made from ruby. The master recording then makes its way from the mastering studio to the pressing plant.

The most difficult and time-consuming step is arguably the electroplating, in which the master lacquer is coated to create stampers. In the early days of vinyl, lacquers were coated in conductive graphite, which was then plated with either silver or nickel. Modern methods use a stannous chloride dipping solution and then atomized silver is sprayed on top. This process often takes the longest, as it is mostly done by hand and requires a lot of skill. After stampers are made, they must be shaped and pressed into the PVC mold and labels to create the record, which is then trimmed, inspected and packaged before it gets sent off for final distribution.

Problems with production and suppliers

Since vinyl’s resurgence, the industry has suffered from a major over-capacity of demand. Pressing companies just haven’t been able to keep up, mainly because of the clear shortage of pressing machines and specialized staff needed to operate them. Due to several dormant years in the vinyl industry, no new machinery had been produced or invented since the 70’s. Companies were therefore forced to forage around for age old pressing machines and used parts. Moreover, human resources is limited, as there aren’t many people who still have the expertise necessary to run the machinery effectively and the search for repairs services is a difficult one.

This brings me to my next point; the monopolization problem. For instance, though there are many pressing companies and lacquer mastering studios, there are only two companies in the world who produce the lacquer used for recording onto. One is a well-established company based in the U.S., which serves the majority of the market. The other is composed of one elderly gentleman based in his garage in Japan. The lacquers that he produces are undoubtedly high in quality, but it is uncertain how much longer he will continue with production. This monopoly and uncertainty of supply isn’t good news for business and has a damaging impact on competitive pricing.

The growing shortage in the vinyl industry is what inspired Robert Brown, Chad Brown and James Hashmi –founders of Viryl Technologies- to build the first new and fully automated record press in over 30 years. Their WarmTone record press is quicker, safer to use, and much less error-prone than its predecessors, using cloud-based software and an IOS application. It can be operated by a single worker and has an average cycle-time of 20 seconds compared to the previous 35 second average. What’s more is that the press is modular –and therefore easier to service- and all manufacturing data is easily accessible via the mobile application.

Final thoughts- the future of vinyl

Will the vinyl record live on, or will it die out as just another fad? Only time will tell. However, experts agree there are a few things that still need to happen to ensure a sustainable future for vinyl; the first of which being that pressing plants and manufacturers need to work on developing high-quality and non-polluting solutions to address the gaps in the industry. Furthermore, the crackdown on plastic means that there also needs to be an easier way to recycle LP records. If this 70 year-old supply chain can successfully learn to adapt, it will serve as a great example for other industries.

Impacts Facing The Supply Chain Ahead of the...