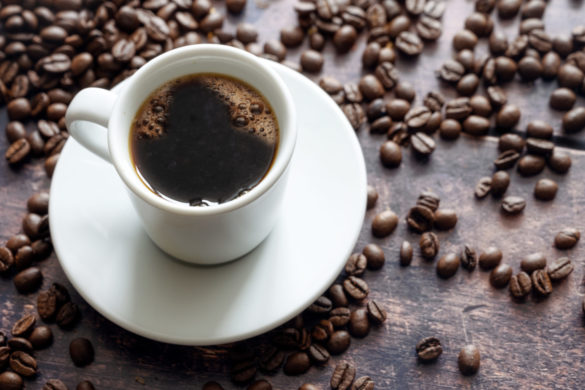 The Amazing Supply Chain of Your Morning Coffee

Even though modern coffee machines offer an attractive variety of caffeinated drinks like cappuccino or latte macchiato, for me it is a simple cup of black coffee that helps kick-start my productivity when the clock strikes 8 am.

This “kick-start”, or boost aspect of coffee was randomly discovered between the sixth and the ninth century. A widespread tale sets the scene in the kingdom of Kaffa, in Abyssinia – which today is Ethiopia – where a shepherd one day observed that his sheep were unusually cheerful after eating white blossoms and red cherries from a previously unknown plant. Further, it is said that the shepherd told monks from the nearby monastery about his new discovery, but they tagged the beans as “Devil´s work” and hurled them into a fire. The delicious smell that rose from the pit of the fire brought on the idea of roasting the beans.

Coming back to reality, the fact is that today, one cup of coffee requires approximately 70 coffee beans which often have quite a long journey behind them. With their roots somewhere in a field in Brazil, the beans make their way into the fully automated coffee machine on the third floor where my colleagues meet to discuss the day’s tasks.

But let´s start with the origin: the coffee seed grows best in a humid climate, with a stable temperature of approximately 25 degrees Celsius (approximately 77 degrees Farenheit), making Brazil, Vietnam, Colombia, Peru and other similar regions optimal growing locations. After roughly ten weeks, the seed sprouts, but it takes around four to seven years for the tree to mature and produce its first crop.

The red cherries are mainly picked by hand, and since not all cherries are ripe at the same time, one tree must be inspected several times. This process requires a significant amount of human resources, and is not the only manual work that goes into harvesting coffee. Apart from removing the hull and dirt from the cherry, as well as separating the two beans embedded in the fruit, the workers have to lay out all the beans in the sun to fully dry them.

After the coffee beans are dried out, sacks containing about 60kg (130 pounds) of beans are passed on to exporters. These intermediaries gather together huge amounts of beans from different farmers to cover the requirements of the global players in the coffee sector, who have their roasting houses and distribution centers worldwide.

The entire supply chain is linked by several intermediaries. Transportation is an important component in the coffee supply chain, representing an enormous global network, which ends with various retailers ranging from small and cozy cafés to giant box stores all over the world. But the coffee beans make several stops before arriving at their final destination, be it from crop to drying station, or from individual farmers to processors and roasters. The greater the number of intermediaries, the more elaborate and stable the supply chain needs to be. A reliable and least-cost supply chain depends on good and fair relationships between all entities.

This video shows the amazing supply chain process behind a cup of coffee with its many stages:

Coffee is consumed throughout the year and the world coffee demand continues to show significant growth. Supply chain management in the coffee sector is therefore not heavily dependent on seasons (and coffee can even be grown year-round) which simplifies the demand planning process. However, the rising demand evokes great pressure on retailers. An efficient demand planning process can ensure maximum availability, but unpredictable disruptions like the recent drought in Brazil, or the rain shown in the video, can create shortages, which leads to increased prices.

Coffee is one of the most traded commodities in the world and reveals a complex and global supply chain with impressionable and immutable dependencies. In the end, the invigorating effect of the morning cup of coffee is not only the business of the brand printed on the package. The coffee supply chain is composed of many different units that all have to ensure quality, starting with a sustainable growing process through to the gentle roasting processes for a special taste and a perfect start to your day at work.

[…] Even though modern coffee machines offer an attractive variety of caffeinated drinks like cappuccino or latte macchiato, for me it is a simple cup of black coffee that helps kick-start my productivity when the clock strikes 8 am.  […]

[…] Amazing Supply Chain of Your Morning […]